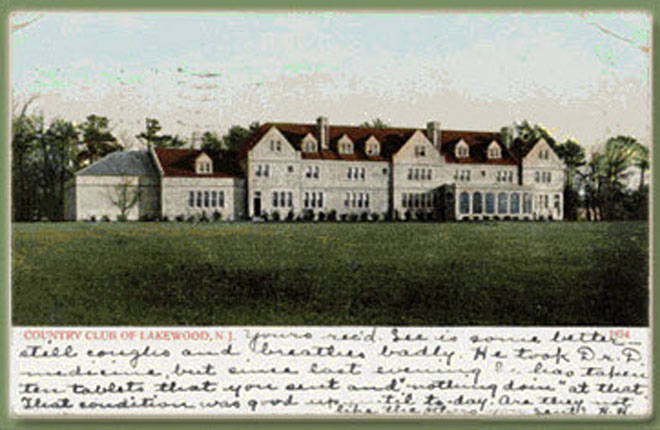 A History of the Lakewood Country Club – Founded 1896

Lakewood, New Jersey was golf’s first popular “off season” gathering place. Before the turn of the century, visitors to Lakewood had their choice of two outstanding “resort” courses whose season lasted from October 1st through the following June 1st. The semi-annual meetings held there were the oldest on the M.G.A. calendar, and the quality of the fields they attracted was second only to the National Amateur.

The first of the area’s courses belonged to the Golf Club of Lakewood, which was organized in October 1894, and incorporated in 1898. Prominent among the founders were Jasper Lynch and Robert Bage Kerr. The golf course actually preceded the club, coming into existence in the fall of 1893 on a site about one mile from the railroad station. Champion Willie Dunn designed the nine-hole course, and his first visit to the site is part of the legend. For it was on that occasion that Dunn and his scarlet golfing jacket had their famous encounter with a bull in the fields, from which only Dunn escaped unscathed. Nonetheless, Dunn’s course was built, and served the club for nearly five years, although it was never considered a first class layout. The third hole doubtlessly was the most severely criticized. It was a 200-yard “par 3”, with a nasty cop bunker dead center at the 170-yard mark, a difficult carry for most players in the era of the guttie ball. In 1896, the course was lengthened eastward into a large field and became an eighteen-hole course.

Lakewood’s biannual tournaments began in 1895 at the Golf Club, with Jasper Lynch himself among the winners that first season. The Golf Club was among the first ten clubs to join the U.S.G.A. as associate members (in the spring of 1895), and later became a charter member of the M.G.A., W.M.G.A., and the New Jersey State Golf Association. The first hole-in-one in the United States was shot at Lakewood in this year. The following year, the first P.G.A.-style tournament was held there.

In the spring of 1898, the Golf Club moved to a new site, about a ten-minute drive from the railroad station, to the west of the village down Lake Drive, just beyond the Laurel-in-the-Pines Hotel. The club’s new home was a converted farmhouse that featured a magnificent café with a large fireplace and floor-to-ceiling windows that extended in a broad curve around the north end of the building, overlooking the golf course.

The club’s new golf links, 18 holes designed by Tom Bendelow playing at 5695 yards, was surrounded by forest, although there were a few isolated trees in the course itself. Laid out over terrain of unvarying flatness, many of the holes ran parallel one to the other. There were no water hazards, and little chance for a lost ball. Nevertheless, the course was considered a good test of golf, due primarily to the clever arrangement of the bunkers. Willie Anderson was the professional. Although he left in mid-1898 for Baltrusol, he was succeeded that fall by Willie Norton. Harry Vardon visited the club on his 1900 tour of this country.

The year after the Golf Club was organized, the Ocean County Hunt and Country Club was established two miles from the railroad depot. Among the organizers were George Jay Gould and William A. Hamilton. The club was organized in December 1895 and incorporated on January 4, 1896. The club bought a sixty acre tract about a mile and a half east of the village, north of the road to Point Pleasant, and by the following season, it sported a 9-hole course designed by Horace Rawlins, winner of the first U.S. Open in 1895. Rawlin’s course measured 2532 yards, with no hole shorter than 200 yards in length, and none longer than 375. Montrose W. Morris designed the clubhouse in Dutch Colonial style, and measured forty feet by a hundred feet. It was supplemented by stables, kennels, and a pigeon house. In addition to golf and the hunt, trap shooting was a popular sport at the club.

The club’s name was changed in 1899 to the Country Club of Lakewood. Under its original name, it became one of the first 40 allied members of the U.S.G.A. R.B. Wilson, former pro at Shinnecock Hills, remodeled the golf course during the summer of 1900. The original names of the holes were retained, although the yardage was increased to 2758 yards.

The Ocean Country Hunt and Country Club sold its Ocean Avenue property to John D. Rockefeller on June 6, 1902. At the time it merged with the Lakewood Golf Club to form the Country Club of Lakewood, which bought land west of Hope Road. This land was part of the Hyer Farm, where Gilbert Hyer had settled in 1804, and which had grown by 1818 to about 270 acres, acquired at a total cost of $645. The youngest of Gilbert’s eleven children, Isaac Hyer, inherited the farm in 1868. In 1901, Isaac Hyer sold the estate to Arthur B. Claflin for $40,000, and died less than a year later. Arthur B. Claflin, one of the incorporators of the Country Club, in turn sold about one hundred acres of the land to the Country Club of Lakewood, for $23,000, and built his own mansion to the west. A new Country Club clubhouse was built near where the fourth tee is now.

George Jay Gould was elected the first president of the new organization, and Jasper Lynch was honored as its first captain. Willie Norton came along as professional. Among the club’s more prominent players, in addition to Lynch, were A.S. Carpenter, semifinalist in the 1901 Met Amateur, and John Moller, finalist in 1903. Both met the same fate – a sound thrashing at the hands of Findlay Douglas, the champion both years.

The new links were laid out over 100 gently rolling acres, and were ready for play by the spring of 1903. The Golf Club’s old course was used in the interim, after which the Laurel-in-the-Pines Hotel ran it as the Pine Forest Country Club. Isaac Mackie of Fox Hills served the club as “winter pro”. Lakewood Country Club’s new course measured 5,810 yards, and did not have a single cop bunker, which was unusual for those days. The second and third holes were side-by-side par 3’s that played back and forth across the creek. The former was to become the club’s postcard hole, the tenth on the card, although the exact date when the holes were rerouted is unknown. The course was overhauled in 1910, although the change may have taken place before then. The semi-annual Lakewood Tournaments shifted to the Lakewood Country Club’s new course following the merger. The dominant figures in these competitions, which attracted a national field, were Walter Travis and Findlay Douglas, both of whom won on several occasions. Travis included four Lakewood holes – the par 3 tenth, par 4 seventh and fifteenth, and par 5 fifth – on his list on his list of the country’s finest golf holes, as published in late 1902 in Golf magazine.

Despite the club’s generosity in giving up its course twice each year, and the high esteem in which the course was held, Lakewood’s bid for a major M.G.A. event fell on deaf ears. Until 1922, that is, by which time the golf course had been completely revamped by Walter Travis. That work took place during the summer of 1920. Although occupying the same site as its predecessor, not a single hole from the original design remained untouched. Several holes on the back nine ( #12, 13 and 14) were cut from a denc=se forest. Travis was joined by the likes of Gardiner White and William Reekie in his belief that Lakewood’s new fourteenth hole was the equal of any two-shooter in the country. Travis’ course remains basically unchanged to this day, with two exceptions: about 80 to 100 yards have been added to both the thirteenth and fifteenth holes, and the fifth hole has recently been redesigned. The 1922 Met Amateur at Lakewood resolved into a contest between the 20-year-old medalist Jess Sweetser of Siwanoy and two leading players from the Upper Montclair Country Club. In the semifinals, Sweetser eliminated New Jersey State Amateur champion Frank Dyer, then whipped J. Edward Hale 10 to 8 for the title. The final match actually was much closer than the final result suggests – Sweetser led by just 1-up after 19 holes. Perhaps the most memorable shot of the tournament was a 25-yard pitch that Sweetser “bumped” through the rough and into the cup for a birdie deuce on the tenth hole during the morning round with Hale. Sweetser was more than lucky, though, as a course record of 71 in the second round attests. Among the defeated in the tournament were Tommy Armour and defending champion Gardiner White.